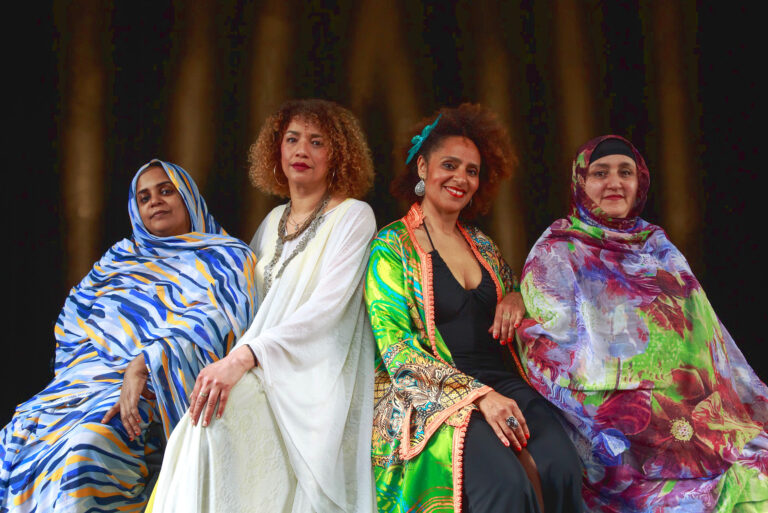 The new project "Les Sahariennes" brings together 4 extraordinary singers, to present the artistry of women from the neighbouring Sahara-countries Algeria, Morocco and Mauretania. Noura Mint Seymali, Malika Zarra, Souad Asla and Dighya Mohammad Salem bring their common musical heritage on public stages to reaffirm their solidarity and to stand united against the difficulties of geopolitics.

Whether Berber, Tuareg, Griot or Gnawa - the musical heritage unites the neighboring countries as a family. The women of the region have always been the guardians of cultural traditions, even if their musical knowledge and virtuosity are reserved for private celebrations and rarely heard in public. A unique opportunity to experience Les Sahariennes live at Salam Orient.

Noura Mint Seymali grew up in a rich musical culture, where the sounds from the Sahara, the Maghreb and West Africa merge. Born into a prominent line of Moorish griot, she was musically trained as a child by her parents, themselves pioneers in further developing their traditional music. With her own band Noura Mint Seymali performs at renowned festivals worldwide.

Malika Zarra comes from southern Morocco and, in addition to her jazz studies in France, dealt with the Gnawa and Chaabi tradition. In the late 90s, she moved to New York and works successfully with various jazz celebrities in the field of experimental music.

Souad Asla was born in the desert city of Bechar, in the south of Algeria. With her music, she always promoted the rich traditions of her homeland and brings together the sounds of Diwan, Malhoun, Zeffani and Gnawa with the music of the North African exile. She herself has been living in Paris for 20 years now and gained international fame with her project "Lemma", which is dedicated to the women from Bechar and their virtuos musicality.

Dighya Mohammad Salem was born 1966 in Dakhla and grew up in an Algerian refugee camp. She toured with her Saharaoui band Shaheed El Wali internationally, but kept returning to Algeria. It was in 2018 wen she decided to seek asylum together with her daughter in France. There she created her new band with the support of the agency of artists in exile.